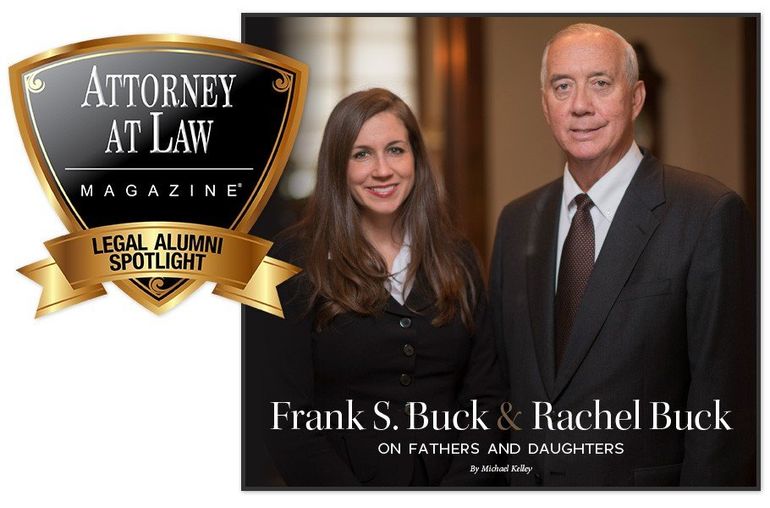 Tucked away on Birmingham’s Southside, overlooking downtown, sits a grand old 1912 three-story brick home. That venerable home houses Frank S. Buck, P.C., one of Birmingham’s established law firms. Today, it stands as one of Birmingham’s premier boutique law firms. The firm’s six licensed attorneys handle a variety of personal injury cases that range from auto and truck accidents, slip and falls, to workers’ compensation and wrongful death cases. Along the way, the firm has also successfully handled a fair amount of fraud and premises liability.

“We handle a wide variety of cases,” says Founder and Managing Partner Frank Buck. “As our reputation has grown, so has the number of referrals. We get them from clients we represented as far back as 40 years ago, right after I started the firm.”

As most personal injury attorneys can attest, the stories behind some of those cases can be gut-wrenching. Buck recalls one of the most tragic, when the driver of an 18-wheeler fell asleep at the wheel and rear-ended a car ahead of him, killing a passenger in the back seat. “We represented the family of that woman in a wrongful death case. We were fortunate to get a substantial settlement for that family,” says Buck.

Daughter and partner Rachel Buck puts great value on getting to know clients as people. “I recall one gentleman who was a World War II veteran. We represented him in an uninsured motorist situation. We took his case to trial and were able to obtain a great verdict against his insurance company. He was the most adorable client, full of wonderful stories of his life. He was 84 when we represented him. He gave me an Air Force blanket that I cherish and still use to wrap my children in.”

The key to success, as she and her father agree, is attention to their clients. That attention has led to a rising tide of referrals through the years that have built the firm to what it is today. “We take an interest in each one,” she continues. “We listen to their stories and we work hard to get them the best settlement we possibly can. And our clients show their appreciation by the large number of referrals we get.”

Her father’s growing law practice made an early impression on Rachel, she recalls Saturdays spent at her father’s law office when it was downtown on the 19th floor of the old City Federal Building. “I used to go to Dad’s law office on Saturdays. I’d watch him with admiration, but not really understanding what being a lawyer was at that time. But I could see that it was something important, and that he was helping others. It was fascinating to watch him interact with his clients. I thought it was really neat that he owned his own office.”

It made an indelible impression and sealed her future. “From about age 7 or 8, I knew I wanted to be a lawyer – there was never anything else I wanted to be,” she says.

But while Rachel knew from childhood that law would be her career, it was not quite as cut-and-dry for her father.

“I grew up in a small Michigan town where my father was a medical doctor, a general practitioner. I knew I wanted to go into a profession, but I did not want to be a doctor. My dad, for example, was oft en called upon to deliver babies in the middle of the night, and I knew I did not want that. He was on call all the time.”

Having ruled out a medical career, Frank Buck looked at other options. “I asked myself, what is the next best profession to go into? At that time, I sort of felt it might be law. In our town, as in nearly all towns, the doctors and lawyers were successful and respected. In those days I used to watch ‘Perry Mason’ on TV, which I always found very interesting. I also decided I wanted my own business, and law seemed to me to be the way to go.”

But having grown up in south central Michigan, Buck decided by age 21 he’d had enough of cold weather. “I wanted to get away from the cold winters and move to a warmer climate. So I got to Alabama literally by picking Cumberland School of Law from a catalog. I had no prior connection to it, nor did anyone else I knew. I applied, they accepted me, and I ended up coming down here. I have never looked back.”

Not long after he got there, he met his future wife, Marti. “She was a freshman at Samford, and I was a second-year law student. We dated a few times, then I asked her to marry me.” Marti saw something she liked in the tall guy from Michigan, and the two wed in Buck’s third year of law school.

The practice today has grown and prospered. Buck says he is staying on the steady path he set out on some 43 years earlier.

“Our goals are to keep the practice about the same size and to keep it a small, boutique personal injury law firm. I’ll practice as long as I can come to the office. I think our business model is good, and I see no reason to change it. We want to maintain the quality of life for our employees. We’ll just keep on keeping on what we are doing.”

As for Rachel, the future is equally clear. “For me, I just want to work with my dad and keep the practice going. I hope that one of my girls will decide to become a lawyer and someday take over from me.”

This article, written by Michael Kelly, originally appeared in Vol. 1, No. 5 of the Northern Alabama Edition of Attorney At Law Magazine.